When I am creating a model of a structure I generally begin with the feature plan in the excavation report or published volume. With regards to the archaic mastaba tombs at North Saqqara the published works of W.B.Emery are authoritative. In the construction of mastaba 3505 I have referenced Excavations at Sakkara. Great Tombs of the First Dynasty III (Emery 1958), and Archaic Egypt (Emery 1972). Tomb 3505 is situated inset from the edge of the desert escarpment towards the southern extent of the line of archaic mastabas at North Saqqara. This tomb, dated to the reign of Ka’a, is significant through the incorporation of a temple within its design, appearing to represent a precursor of the general formation of the pyramid complex of later dynasties (Emery 1958, 6).

In order to create the feature the plan is scanned and attached to a clean CAD file. The image is then scaled to actual size, a ratio of 1:1. The components of the plan outline are drawn using polylines.

Plan drawn with polylines in CAD

The drawn feature is georeferenced to the correct location in CAD Map 3D and then imported into CAD Civil. Once in CAD Civil the 3D model is constructed. This image shows an x-ray view of the model to display the internal detail.

Isometric view of the tomb model through an x-ray filter

To complete the process, the elevation of the structure model is referenced to the ground surface.

Once completed these models can be exported for use in other software packages or used within the native CAD Civil environment. 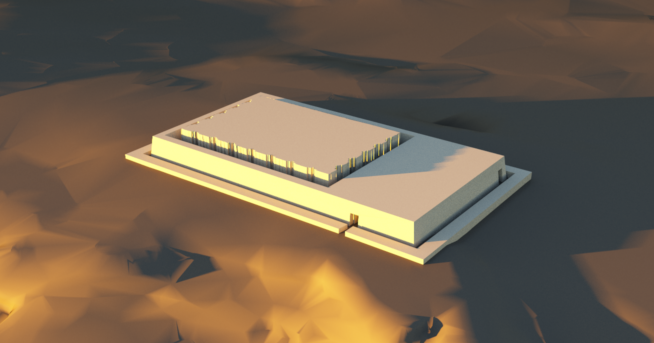 Tomb 3505 is shown above in isolation, but is one of many features that form the funerary landscape of North Saqqara, and the landscape model grows in complexity with each feature added.